What should we do now
for the future of Japanese film...?

We believe the answer is to create the “base”

The base of filmmaking which looks to the world, nurtures and demonstrates the talent of creator, and forms the foundation for creation in the long term.

The movie that is born here is

The movie that is born here is

The movie that is born here

unites creator
and audience into one

We make the passion of the creator and the interests of the world into a film that will move your heart.
We create and deliver such movie to Japan, Asia and the world.

Something “one and only” is here. 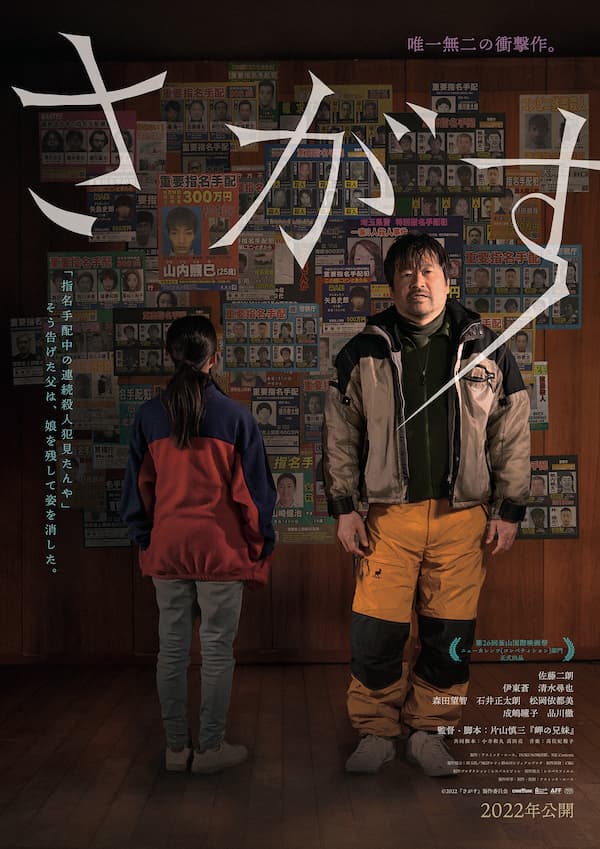 Coupled with the catch phrase of the film “‘I saw the serial killer who is wanted by the police.’ The father told and then disappeared, leaving his daughter behind.”, we can’t help but foresee the unusual and suspenseful narrative of this film.

Prior to the release of the film, we have also received applause quotes from Yutaka Takenouchi, who starred in the drama series “Samayou Yaiba (aka. The Hovering Blade)” directed by Shinzo Katayama, director Isao Yukisada, and director Eiji Uchida! Please visit the film’s official website to read the comments.

The up-and-coming cast that will add color to the story along with Jiro Sato has been unveiled. Aoi Ito plays Kaede Harada, the daughter of Jiro Sato’s father Satoshi, who suddenly disappears and is desperately searching for him. Also, Hiroya Shimizu plays Terumi Yamauchi, a wanted serial killer. In addition, Misato Morita plays a young female Starling who has a connection with the serial killer played by Shimizu. Jiro Sato’s humorous public image has been sealed for this film. The supporting actors are also a unique cast of talented and attractive individuals who will lead the Japanese film industry in the future, giving birth to a one and only shocking movie!

The film has also been selected as an official selection for the New Currents (Competition) section of the 26th Busan International Film Festival, one of the largest film festivals in Asia.

September 01, 2021
The 1st film from CINEMUNI is to be “Missing” starring Jiro Sato & directed and written by Shinzo Katayama!

The brilliant director Shinzo Katayama, who made an impressive debut with “The Siblings of the Cape”, has released a unique and shocking film starring Jiro Sato, which is scheduled for release in 2022 and will be an official selection of the New Currents (Competition) section of the 26th Busan International Film Festival! Combining the passion of Korean films, which director Katayama studied when he was an assistant director, with the subtlety and skillful storytelling of Japanese films, this is a “one and only shocking movie” full of overwhelming strength as a film. Please keep an eye out for more international production and exploitation in the future!

Asmik Ace and DOKUSO Theater have teamed up to launch “CINEMUNI”, an all-inclusive film development project for next-generation creator with a view to everything from planning and production to theatrical release and international exploitation. The name of the project, CINEMUNI, was coined by combining the words “CINEMA” and “MUNI”, the one and only. The 1st film from CINEMUNI will be directed by Shinzo Katayama, who made a shocking feature film directorial debut with “The Siblings of the Cape”.